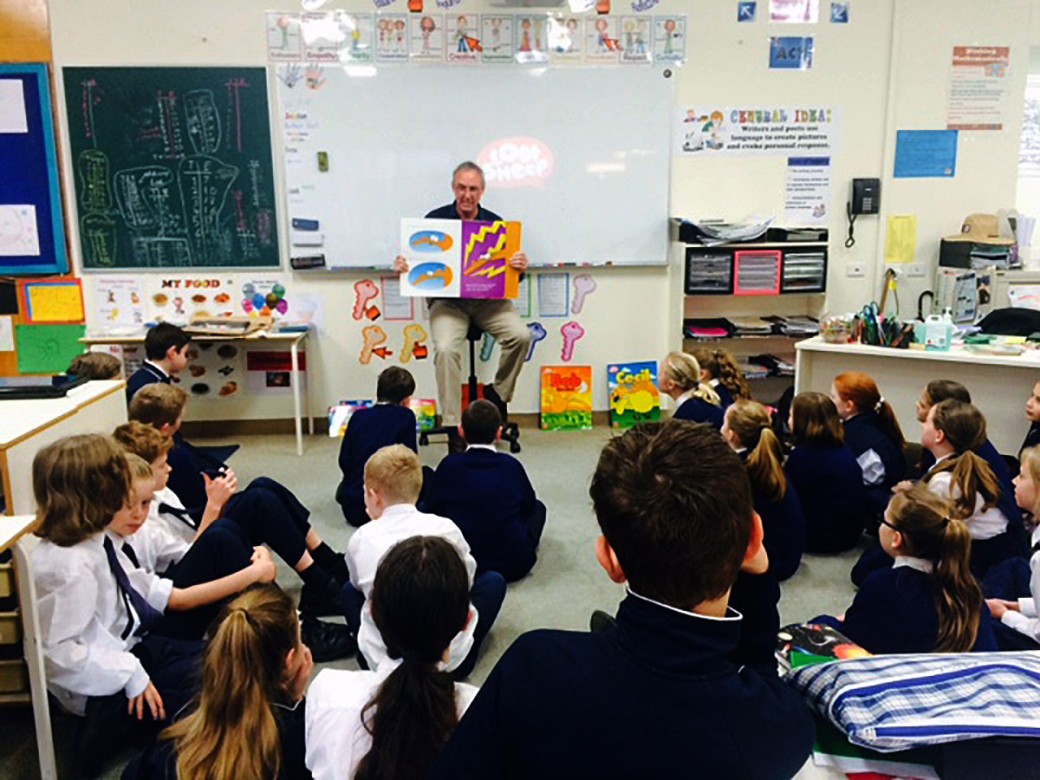 Have you ever wondered how a best selling book ‘happens’? How does a writer come up with ideas? What are the ‘tricks of the trade’ to capture readers and draw them in to a story?

These are a few of the questions that the students of Rooms 1 and 2 (Year 5 and 6) put to visiting author Andrew McDonough when he visited them recently.

Andrew McDonough is the creator, writer and illustrator of the highly regarded Lost Sheep children’s ministry books including the very popular Cecil the Lost Sheep. At a recent visit to Rooms 1 and 2 (Years 5 and 6) he told the students how he approaches his writing, where his inspiration comes from and what techniques he uses to make a connection with his reader.

Mr McDonough didn’t enjoy writing when he was at school. “When he was a student, he used to draw pictures on his school books, which was against the rules! And as punishment, his teachers made him write stories … which [at the time] he hated!” Alice recalled.

Mr McDonough explained how his first book took many years and lots of “editing, checking and changes” before it was finally printed – a process which he also demonstrated to the students.

He went on to explain that inspiration comes from all around him: fragments of ideas and things that happen at anytime. “I learnt that writers are observant and pay attention to what’s going on,” said Zoe S.

Mr McDonough shared a number of his stories with the students, accompanied by his bright and colourful illustrations – illustrations that are appropriate and ‘intentional’, designed to support the text and reflect the emotions of the characters. “I liked his drawings,” said Ebonie, “they made me feel just like the story was describing”.

The Lost Sheep stories are littered with humour, questions and plot twists that keep readers connected and intrigued and are designed to elicit a response (either emotional or physical). The Invisible Gorilla was a story that captured Riley’s imagination with its use of a plot twist and hidden messages: “[It was interesting] how people focus on one thing so much that they miss other things in the story …”. Riley also liked the use of rhyme in some of the stories. “Rhyming can relax people and influence how people feel about the story,” he said.

The students were then guided through an activity that began with each student writing their own short story using some of the techniques Mr McDonough shared. They then passed their stories on to another student in the class who wrote about how the text made them feel. Finally they made connections between stories and responses joining them like a giant web to show how different stories can evoke different emotions among readers.

Mr McDonough’s visit coincides with Room 1 and 2’s exploration into the concept: “Writers and poets use language to create pictures and evoke personal response” and will help inspire the students for their upcoming ‘Exhibition Walk’ where they’ll display their own written works around different themes.

We thank Mr McDonough for visiting and sharing his passion and experience with us. You can find out more information about the Lost Sheep stories at lostsheep.com.au or follow Cecil the Lost Sheep on Facebook.