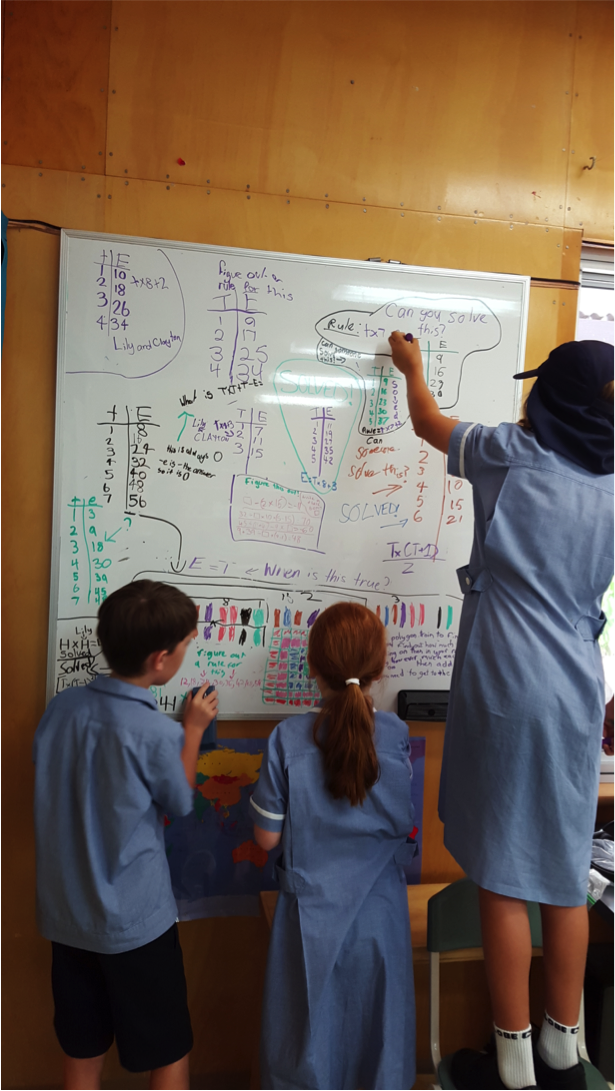 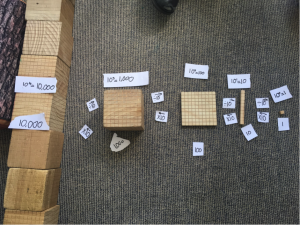 At St Peters we help our students to see Mathematics has a subject which searches for, studies and describes pattern.  Making sense of mathematics relies on an understanding of the patterns which underlie it. By seeking patterns, students are building knowledge as well as learning to function in a mathematical way.

Activities with pattern enable us to investigate many mathematical ideas. Our number system, for example, is an incredibly sophisticated pattern which groups numbers into tens, tens of tens, tens of tens of tens and so on. Once understood, it is used to make predictions about how numbers are named and written. Different measures (e.g. money, length, area and mass) – along with the number system itself, embody the Base 10 principle. This same pattern transfers from one situation to another. 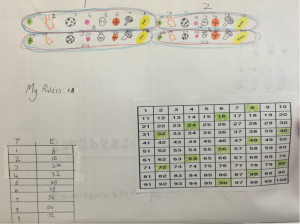 The multiplication tables are an example of expressing number sequences. Interval counting by groups (5, 10, 15, 20 …), is another. When these sequences are mapped on a 10×10, one to 100 numeral grid, these patterns become visual as well as numerical.  Measurement of time is complex as well, because the patterns governing it are in several different bases e.g. Base 60 (minutes in an hour and seconds in a minute) and Base 12 (hours on a clock face). Students need to understand the patterns in time itself and in the tools used to measure it in order to become use them effectively.

An ability to use patt 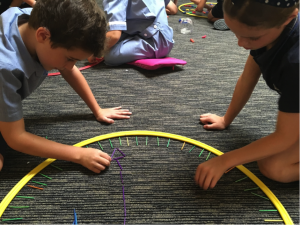 ern develops over time. Once students are sorting and classifying groups of objects according to a variety of characteristics, they are ready to explore the concept of pattern. As students make and continue to make patterns, there will be growth-points throughout this process which indicate their developing understanding and skill in using pattern. The teacher constantly adjusts the learning situations to meet the changing perceptions of each learner. Working with pattern occurs regularly throughout the years of primary school, with students finding different and interesting ways of making, recording and thinking about pattern. Students are then capable of using the concept to skilfully search for patterns in mathematical information and to articulate generalisations using algebra – the language used to describe pattern. 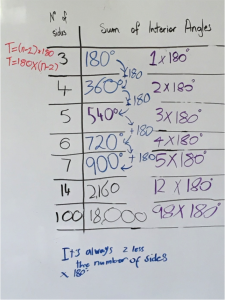 Once the concept of pattern is understood, students use it during many mathematical investigations. As students progress through primary school they explore: 1) mathematical ideas [e.g the sum of interior or exterior angles of polygons is constant depending on the number of sides],  2) patterns in the information gathered during these inquiries [e.g. the sum of interior angles for triangles is always 180°, for quadrilaterals it’s 180° + 180°, for pentagons it’s 180° +180°+180° etc.],  3) generalisations and ways of expressing these generalisations as relationships [e.g. sum of interior angles = 180°(number of sides-2)], and 4) more complex problems using those generalisations [e.g. problem-solving to calculate the unknown angle]. 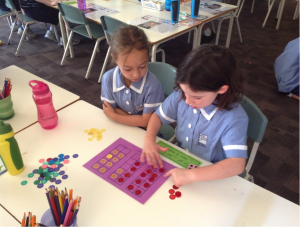 Students take responsibility for their learning as they willingly engage in mathematical inquiry. Within the PYP programme, they become skilled in using their profound knowledge, thinking and communication skills to problem-solve across all areas of the curriculum – and more importantly, their numerate lives. 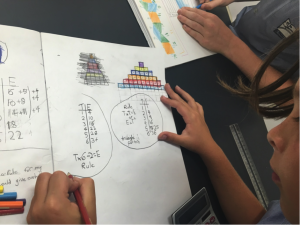